Q. What are Telecom Centres of Excellence India?
Ans. Telecom Centres of Excellence (TCOEs) are a joint initiative of Government of India, major telecom operators (Telcos) and premier technical and management institutes of India in what has been termed as Public Private Partnership (PPP) mode. Eight TCOEs have been established in Indian Institutes of Technology (IITs) at Madras, Delhi, Kanpur, Kharagpur, Roorkee and Bombay, IISc Bangalore and Indian Institute of Management, Ahmedabad.
Q. What are the main objectives of the TCOEs?
Ans. To sustain or further accelerate the impressive growth rate of Telecom in India by capacity building, making available affordable local solutions through innovations, Research and Development, think tank activities to aid Government and Corporates in decision making and a greater role in telecom standardization activities for the benefit of the Indian industry.
Q. In what ways is Government supporting the initiative?
Ans.Government of India, through its Ministry of Communication and IT (MOCIT), is supporting the initiative by cash contributions and by making available the infrastructure and faculty support at IITs, IISc and IIM, which are (largely) Government funded autonomous educational institutes. MOCIT has also extended office space and infrastructure support to the TCOEs’ Coordination Centre at New Delhi through C-DOT (Centre for Development of Telematics, a Telecom Technology Development Centre of Government of India). A major share of Coordination Centre’s funding also comes from MOCIT.
Q. Which Indian telcos are associated with the TCOE initiative?
Ans. Eight largest telcos have joined the initiative as Principal Sponsors. The pairing is given below,
a. Aircel is the the Principal sponsor of TCOE at IISc Bangalore
b. Bharat Sanchar Nigam Ltd. (BSNL) is with TCOE at IIT, Kanpur
c. Bharti Airtel is with TCOE at IIT Delhi
d. Idea Cellular is with TCOE at IIM Ahmedabad
e. Reliance Communications is with TCOE at IIT Madras
f. Tata Teleservices is with TCOE at IIT Bombay and
g. Vodafone is with TCOE at IIT Kharagpur
h. RailTel is with TCOE at IIT Roorkee
Q. In what ways are Telco’s supporting the initiative?

Ans. Initially, Telco’s provided a major share, 90%, of the funding to TCOEs. As co-chair of the TCOE Core Group they were in a position to steer TCOE’s projects and work towards the areas of their immediate concerns and long term needs. With the constitution of the central Steering Committee under the new Project management framework, the respective Telco’s will continue to be associated as the sponsors for the TCOE’s and also fund projects at the other TCOE’s. TCOE’s capabilities are further being opened up to the entire ICT ecosystem to benefit and lead India to the path of Make in India and Digital India and Telco’s will provide their infrastructure and network for testing and validation of new technologies.

Q. What motivated telcos to be a part of the initiative?
Ans. The benefits to telcos are multifold,
a. The TCOEs will take up their immediate problems, technical, operational or management and come out with solutions.
b. TCOEs will help in training their manpower.
c. Telco will have a share in ownership of IPRs generated in the TCOE of which it is a member.
d. Telcos will have access to the knowledge resident and created in all the TCOEs
Q. What are the ‘focus areas’ of the TCOEs?
Ans. In order to cover all important areas of the telecom research, a focus area has been identified for each TCOE. Thus,
a. TCOE at IIM Ahmedabad will primarily focus on Telecom Policy, Regulation, Customer care
b. TCOE at IISc Bangalore on  Information security and Disaster Management of Telecom Infrastructure
c. TCOE at IIT Bombay on Rural Telecom Technology
d. TCOE at IIT Delhi on Telecom Technology and Management
e. TCOE at IIT Kanpur on Multimedia and Telecom, Cognitive Radio and Computational Mathematics
f.  TCOE at IIT Kharagpur on Next Generation Networks and Technology
g. TCOE at IIT Madras on Telecom Infrastructure (Active and Passive) and Energy
h. TCOE at IIT Roorkee on ICT and Broadband Applications
Q. What is the organization structure of TCOEs
Ans. TCOEs have a two tier structure, a central Governing Board with Secretary Telecom, Government of India as ex-officio chairman and individual Core Groups (variously known as Boards / Steering Committees at some centres).
Q. What is the legal status of TCOEs
Ans. TCOEs came into existence by signing of tri-partite Memoranda of Understanding (MoUs) between Department of Telecom, MOCIT, Government of India, Principal sponsors and the host Institutes. Eight such MoUs were signed on 16th October 2007, 12th December 2007 ,15th February 2008 and 5th June 2013 to create the TCOEs. TCOE at IIM Ahmedabad has been registered as a section 25 company and that at IIT Madras as a society under Tamil Nadu Societies Act. Other TCOEs function as departments of the host institutes. TCOE Coordination centre is registered as a society and has been granted approval u/s 12AA & 80G of Income Tax Act, 1961.
Q. What are Associate Sponsors?
Ans.Telecom and related companies are encouraged to join Associate sponsors by signing MoU with the TCOE of their choice and making commitment to pay at least Rs 2 crores over a period of 5 years. As of now, Alphion has joined TCOE at IIT Kharagpur as Associate sponsor.
Q. What benefits can Associate sponsors expect on joining TCOEs?
Ans. Associate sponsors can expect multiple benefits like,
a. A non-exclusive right to use technology developed at TCOE on payment basis
b. Access to knowledge base of TCOEs
c. Participation in TCOE Core Group (also known as Board or Steering Committee) meetings
d. Access to Training facilities at TCOEs
Q. Can TCOEs take up Research projects for companies other than their Principal / Associate sponsors too?
Ans. Yes, in fact Contract research projects are important to TCOEs in their endeavor to become self sustaining after a period of initial funding by DoT and industry sponsors.
Q.Who all are eligible to benefit under the New framework of project Management?
Ans. All stakeholders of the ICT and Telecom ecosystem are welcome. (Manufacturers, Network Service providers, Mobile VAS providers, Entrepreneurs, Academicians and students etc)
Q.How are projects going to be evaluated and approved?
Ans. The proposed Projects would be evaluated and approved by a high-power Steering Committee. Once the problems/issues are received from various sources like Entrepreneurs, Industry, Government and Academia, they will be circulated among the TCOE’s, who will revert with research proposals along with funding requirements and milestones and also identify and shortlist the appropriate entrepreneur or Industry/Manufacturer for commercialization. A competitive bidding process will be followed among the TCOEs and the fully empowered Steering committee shall evaluate proposals and identify the appropriate TCOE for assigning the project, determine research outcomes with deliverables, timelines and also indicate intermediate milestones for purposes of review and constitute a review committee. The Steering Committee shall also approve funds required. Once a project is completed successfully, it shall go into product testing and commercialization phase.
Q. How Academia other the listed one under TCOE India can participate in TCOEs initiative?
Ans. Any Academic institution of repute like NITs, IIMs, IIITs, BITS-Pilani, or emerging Universities etc., having adequate research capacity and Industry partnership, other than the listed ones under TCOE India can also participate in this initiative in collaboration with Existing TCOEs.They are required to associate with an existing TCOE for submission of their project proposal. The submission of the project proposal and the allocation of the project after the approval of the steering committee will be only through and to the TCOEs .The interested institute’s faculty has to log in as an Academia and can submit their credentials and interest areas to showcase to the Industry/ Entrepreneurs for solving the problem issue faced by them.
Q. What are the steps involved  under the New Project Management Framework?
Ans. 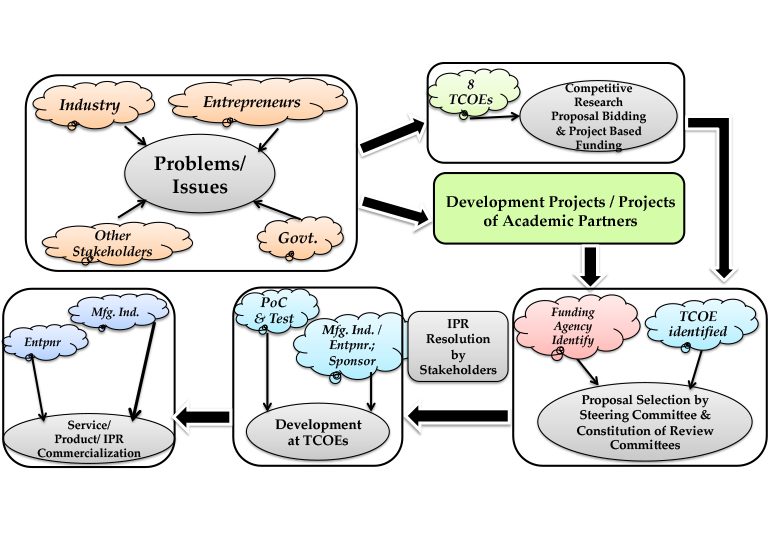 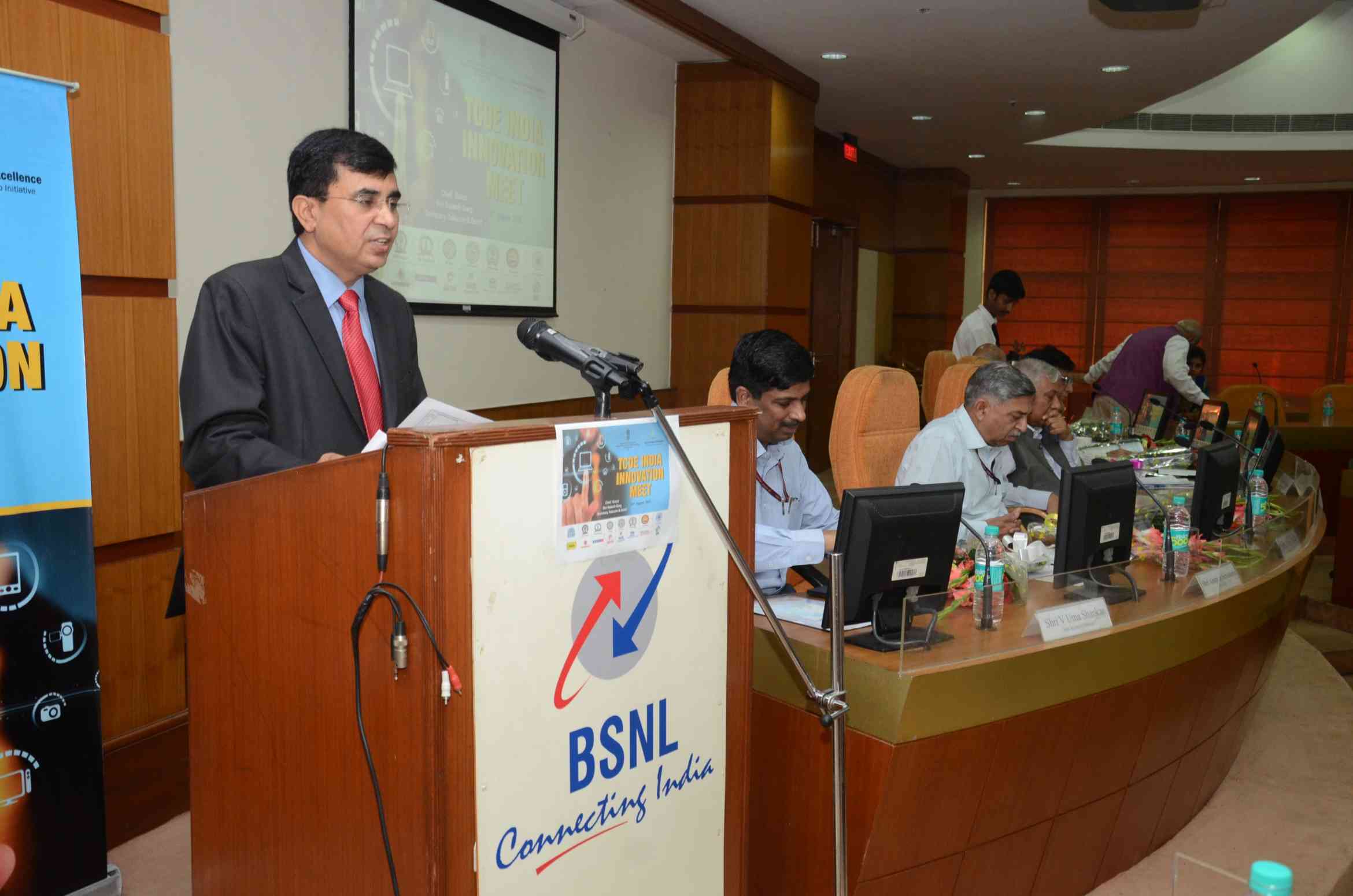 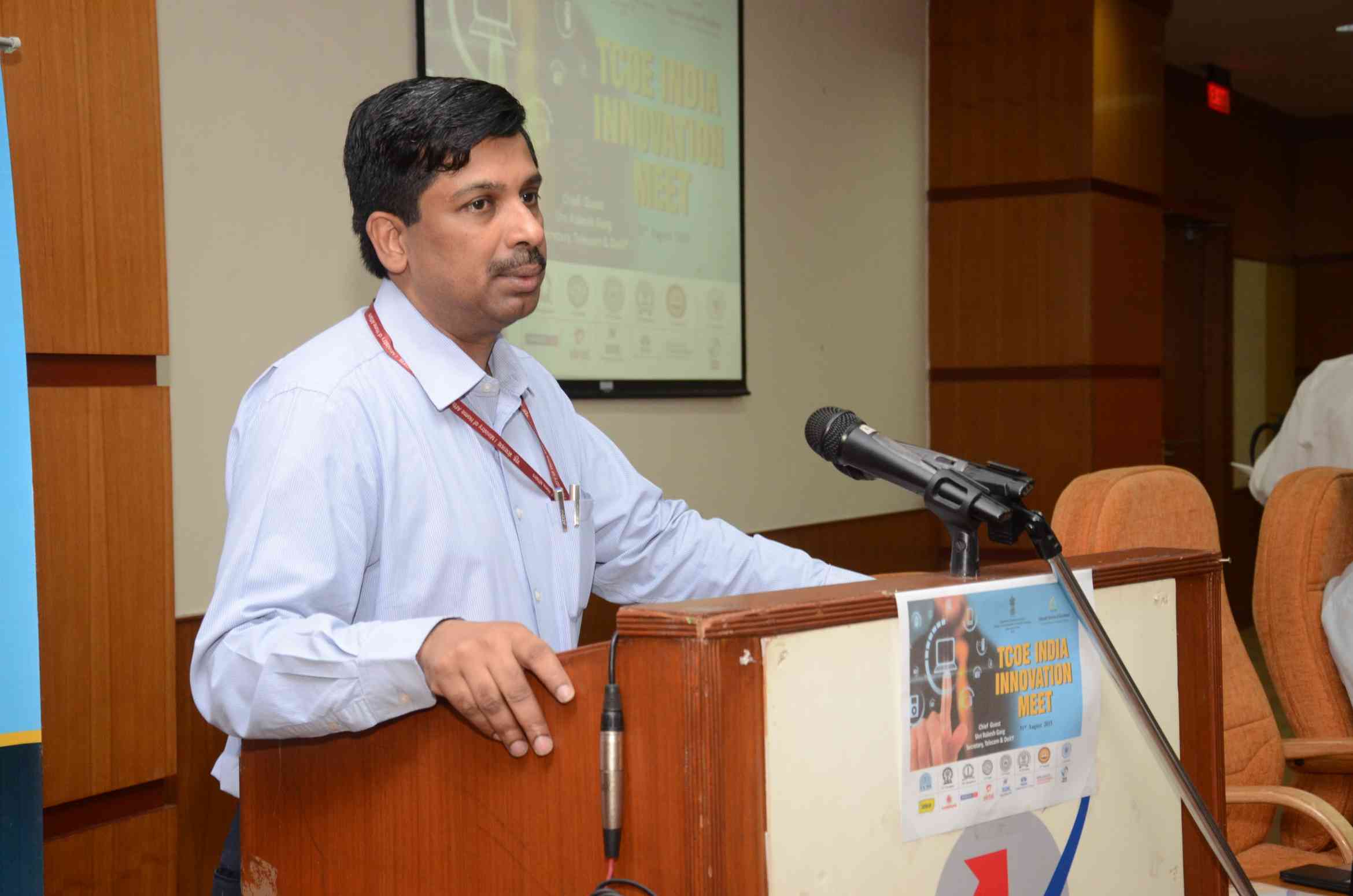 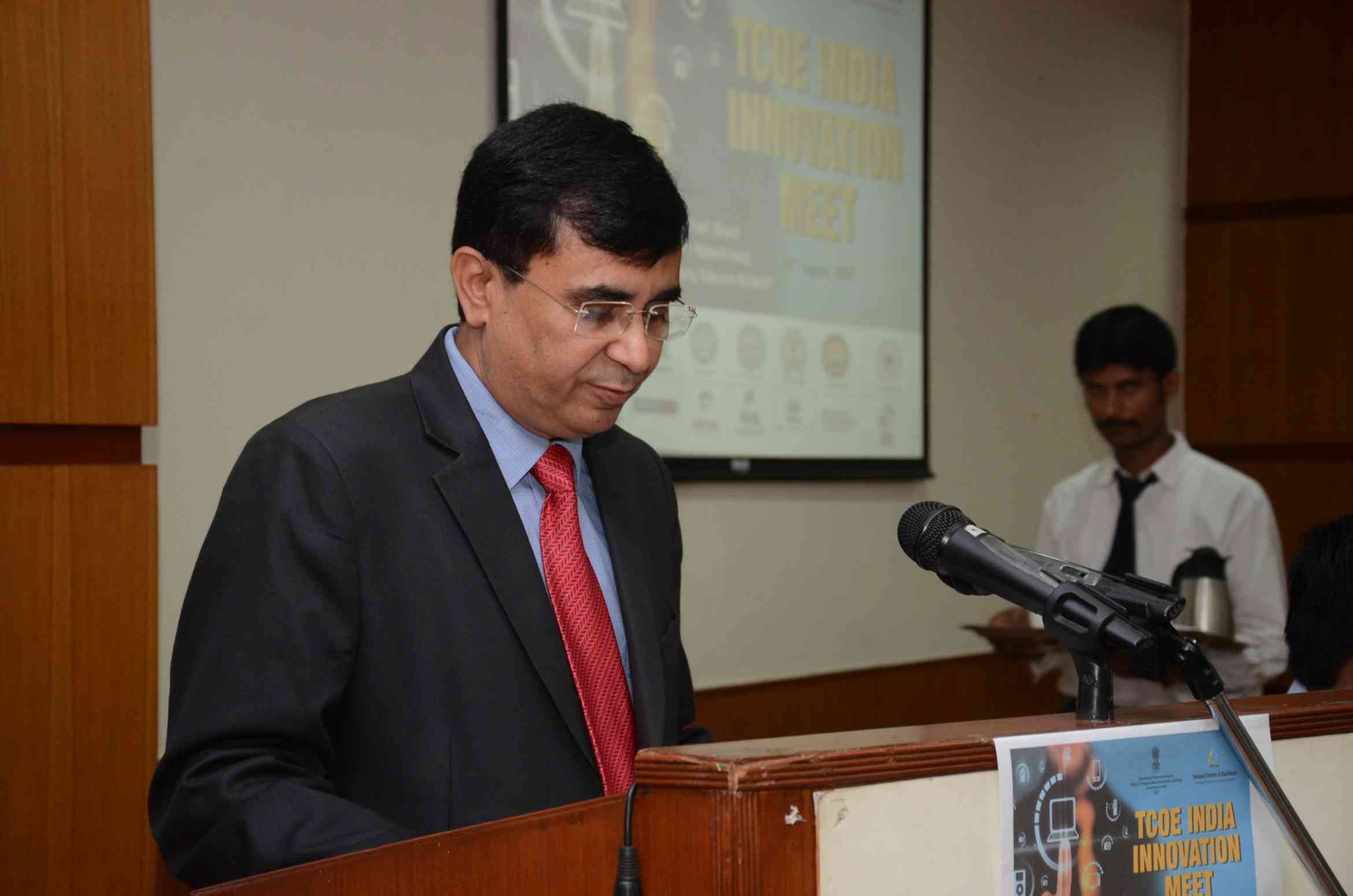 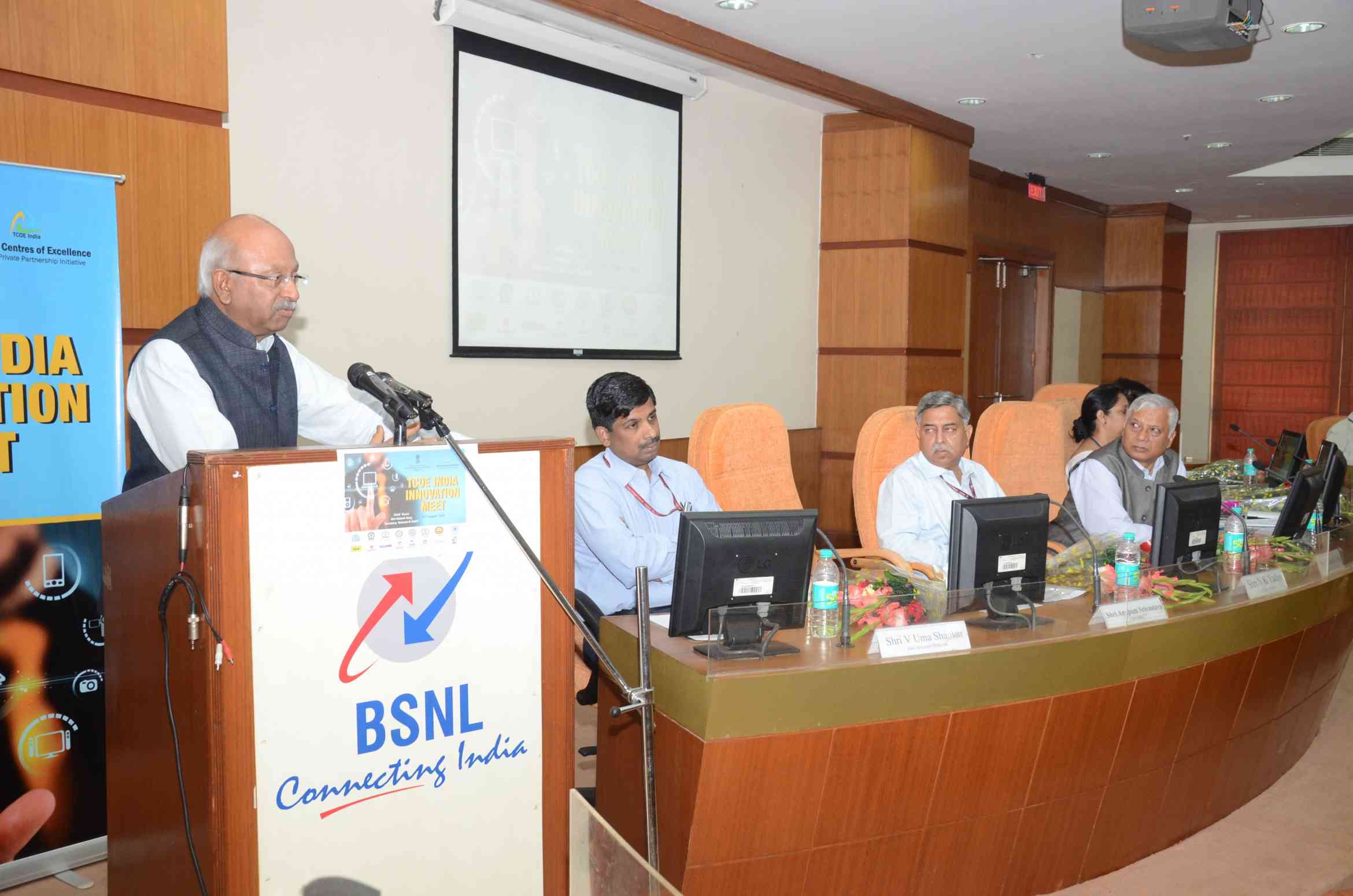 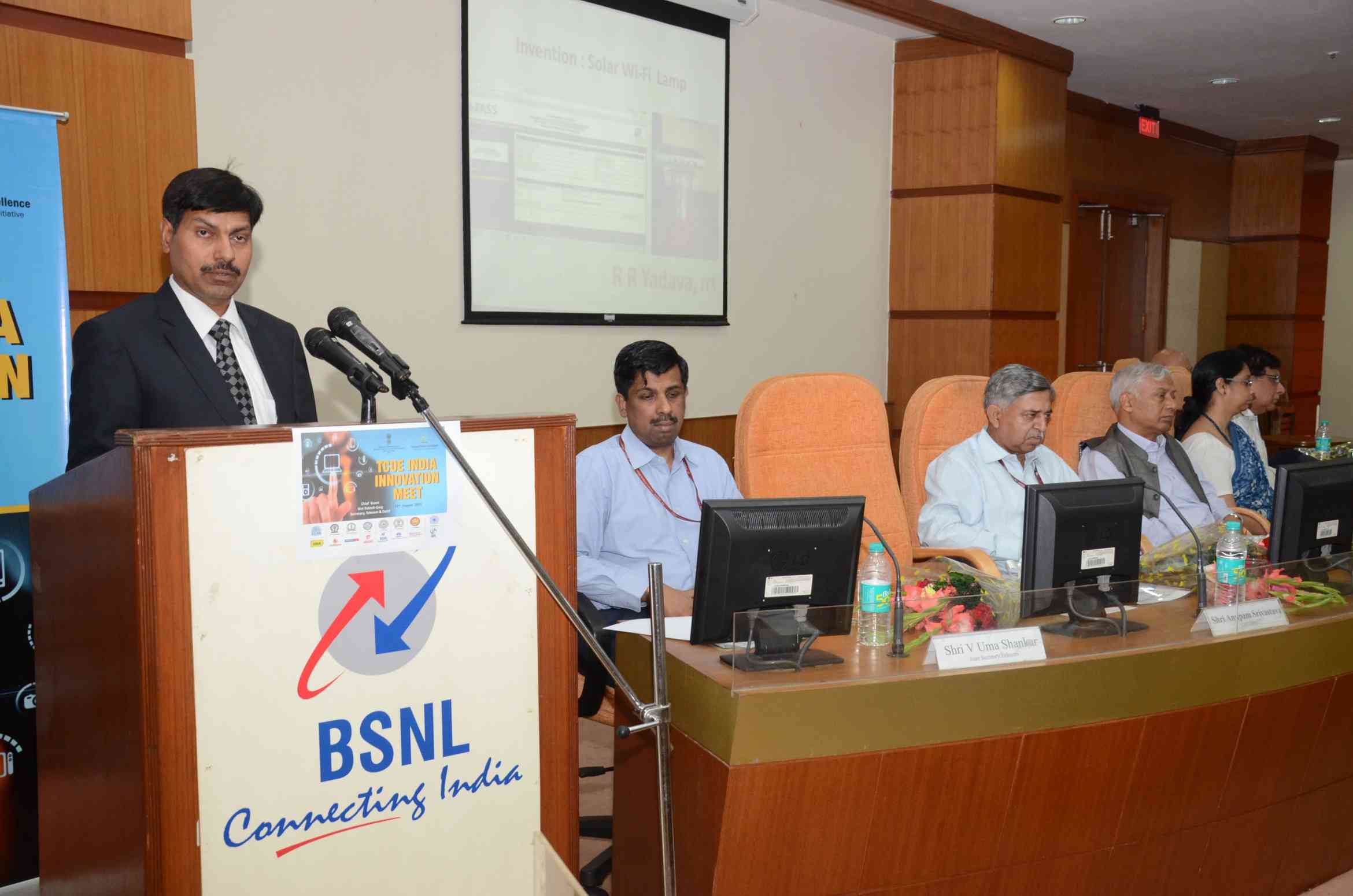